Who doesn’t love baby cows?  Well tonight we got the chance to learn about the maternity barn, the exact place where baby cows get to meet the Alexandre Family!  But before we talk about that, let’s talk about the the upcoming Bucket Calf Show at the Fair!  August 1, 2019 at 11 am (I think, but check the fair program) these amazing young children will be showing their calves in front of judges. Getting the animals ready for fair can be a lot of work. Some of the cows need a lot of training while others are naturally ready for the show ring. Tonight we heard from an experienced exhibiter who demonstrated to the young bucket calf participants how to hold the halter to lead the calf around.  The kids practiced, some were successful, some struggled, but it is all about practicing.

The kids then broke into age appropriate groups so they could practice walking the cows around.  The six and under group spent a little time learning how to hold the halter, but in reality mostly worked on how to get into a circle…The older groups worked on other techniques, such as leading the calf and how to publicly speak when asked various questions.  My favorite group just talked about the most important thing the judges are looking for at the calf show, SMILING! 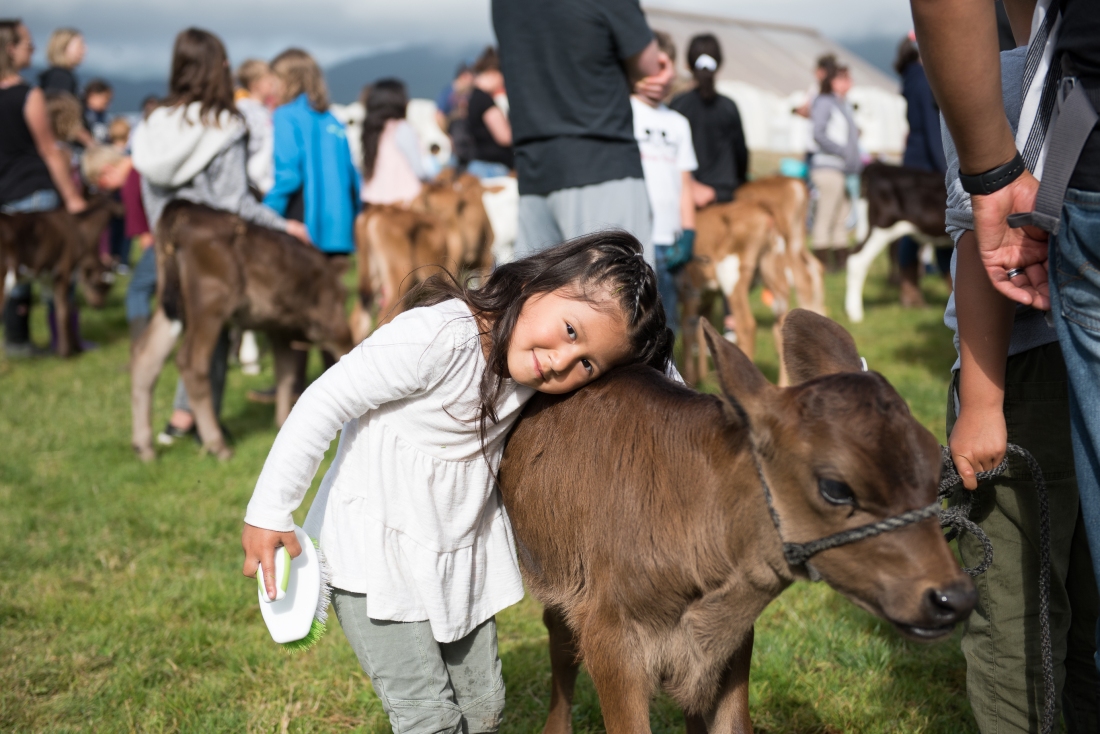 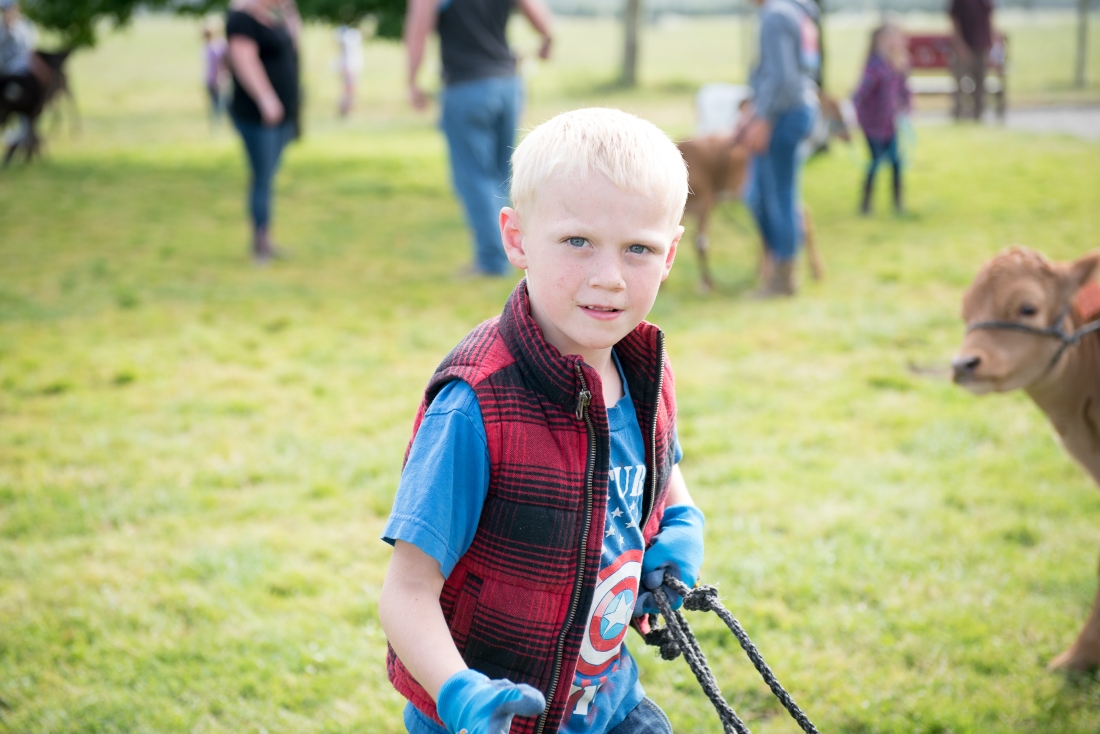 After practicing, the kids put their calfs away and moseyed on over to the maternity barn to learn all about the birth process.  Stephanie provided valuable information about the birthing process and reminded the kids that cows and humans are different in their mothering instincts.  While humans look forward to spending time with their families, cows are comfortable with their herds.  After a mother gives birth, she can become anxious and want to return to their herd. 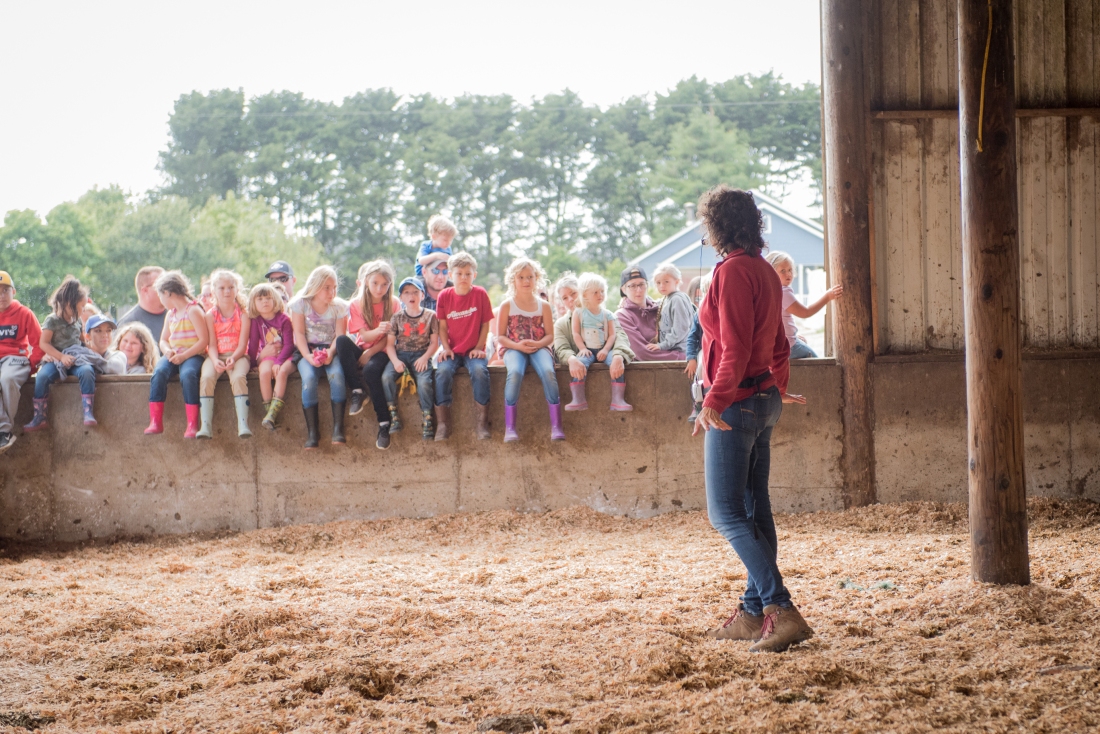 Stephanie pointed out how relaxed the momma cows in the Maternity Barn were.  She said that it is their goal, and their employees’ goal, to make sure these cows are well taken care of and this was evident by the cows who were currently laying around the Maternity Barn.  Not one of them seemed to be distressed.  Even as I was taking pictures, one of the momma’s came within a couple feet of me just to say hi. 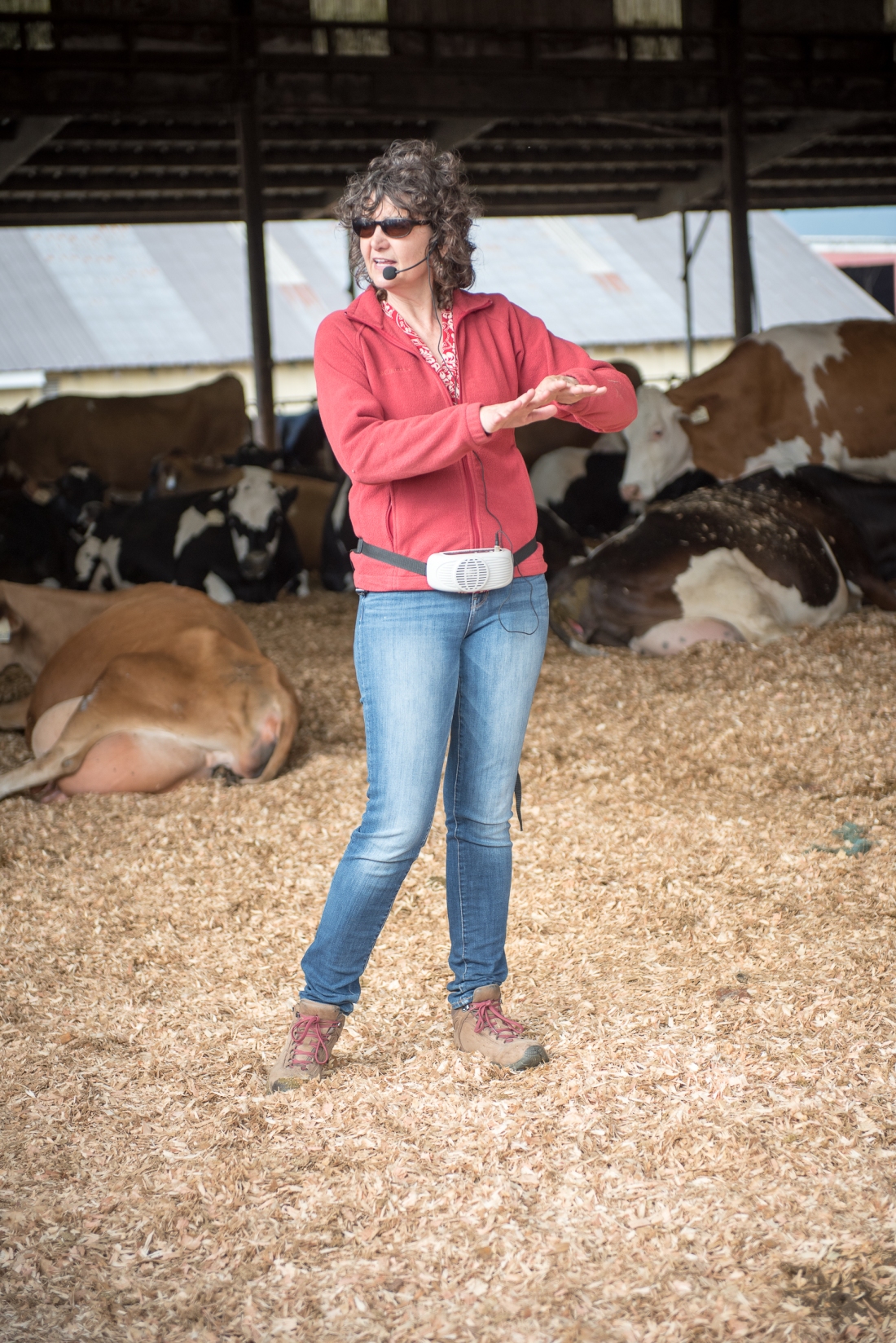 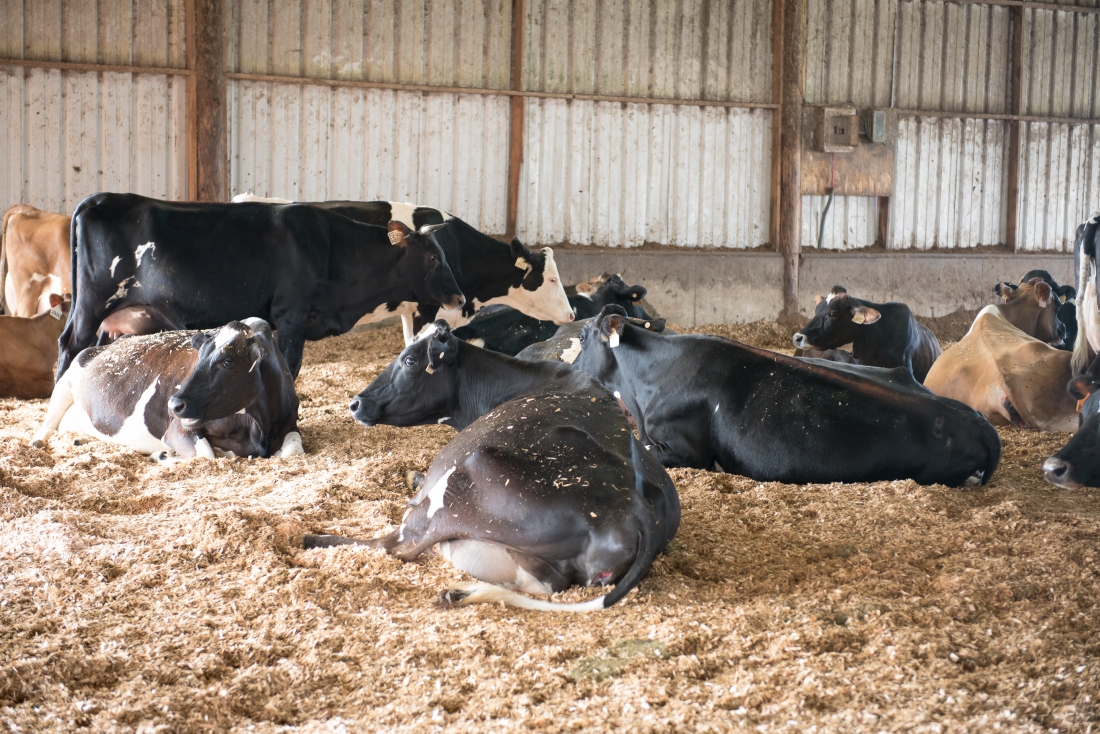 In order for cows to produce milk they need to give birth to a calf. At the dairy, pregnant cows are separated from the milking herd about 2 months before they are due to give birth (they are classed as ‘dry cows’). When a cow is ready to give birth she is brought into the maternity barn, where she can have a clean, dry place.  Here she can be monitored to make sure her birthing process is safe. As long as the calf is in the correct position for birth, the birth should not need any human assistance. During birth, both the calf’s feet emerge first, followed by his/her head.  Once the birthing begins, it normally takes about 30 minutes. 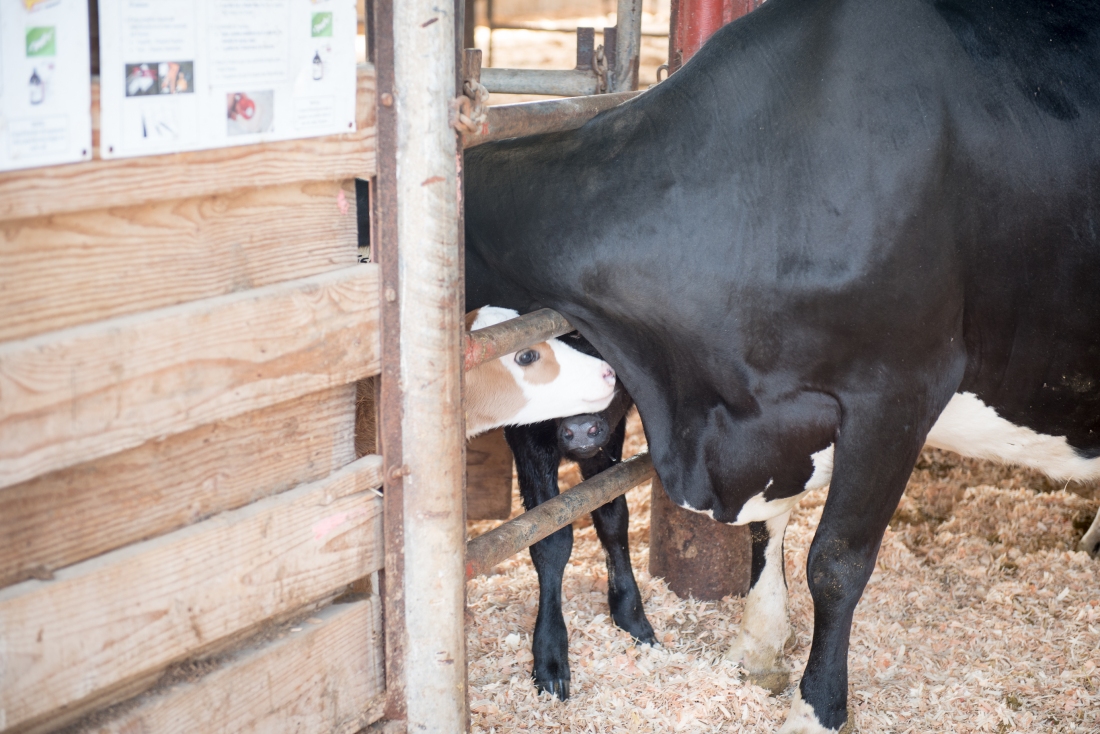 When a calf is born the mother cow, and maybe a handful of other cows, lick the newborn.   Within an hour of birthing, the mother is milked so the valuable milk (called colostrum) can be obtained to feed to the baby.  The momma cow is so relieved to be milked because her udders are very full (The older the cow, the more milk she will have in her udders at the time she goes into labor).  When the calves are born, they are very susceptible to illnesses, which is another reason they are separated from their mothers.  Dairy farmers want to make sure their cows are well taken care of and they are able to produce healthy milk to sell to the public. 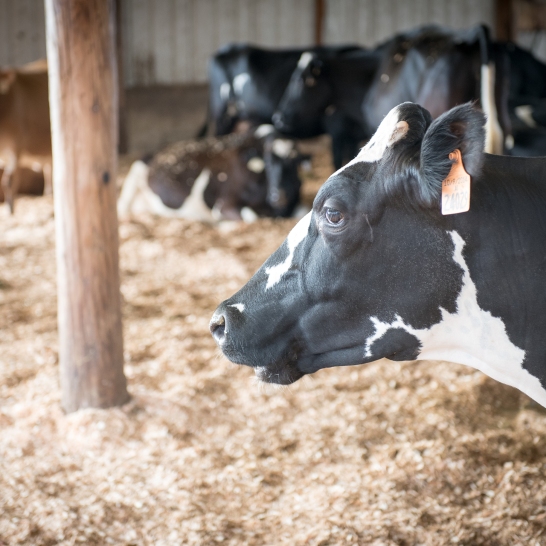 Next week we are going to learn all about milking a cow.  Not to spoil it, but it doesn’t look anything like the next picture!

Tonight was week 2 of the Bucket Calf Program offered yearly by the Alexandre Family.  The children arrived and spent time with their calf, learning some initial techniques on how to show cattle in the local county fair.  Vanessa and Stephanie went over some reminders, such as how to hold the halter, how to walk the calf, and other safety issues, such as washing your hands.  Big reminder:  assume the fences surrounding the areas are “hot”.  Meaning, be cautious when going near the fences as they could shock you.  Best to just steer (pun intended) clear of them.

The Bucket Calf participants are really getting the hang of their calves.  They walked around the yard, learning to maneuver the little guys.  Some of the kids remembered to bring gloves to avoid rope burns and brushes to brush their calves.  Also, CLOSED toe shoes!  Way to go.  I don’t see anyone with open toe shoes and that is very important when small little calf hoofs are around.

This week we learned about the Calf Hutches on the Farm. These large individual hutches work as great mini-barns for calves for their first two months of life before they go to pasture! Each new baby receives a clean hutch, with milk, hay, and water daily. With the helpful eye of the calf crew, and protection against illnesses from each other, newborn calves will thrive in their first few months of life.  The use of hutches cuts down on injuries such as broken legs or bruising from being stepped on in crowded conditions. It also gives calves a place of solitude.  They will perform better, have more resistance to disease, and can more easily be observed and treated for sickness. 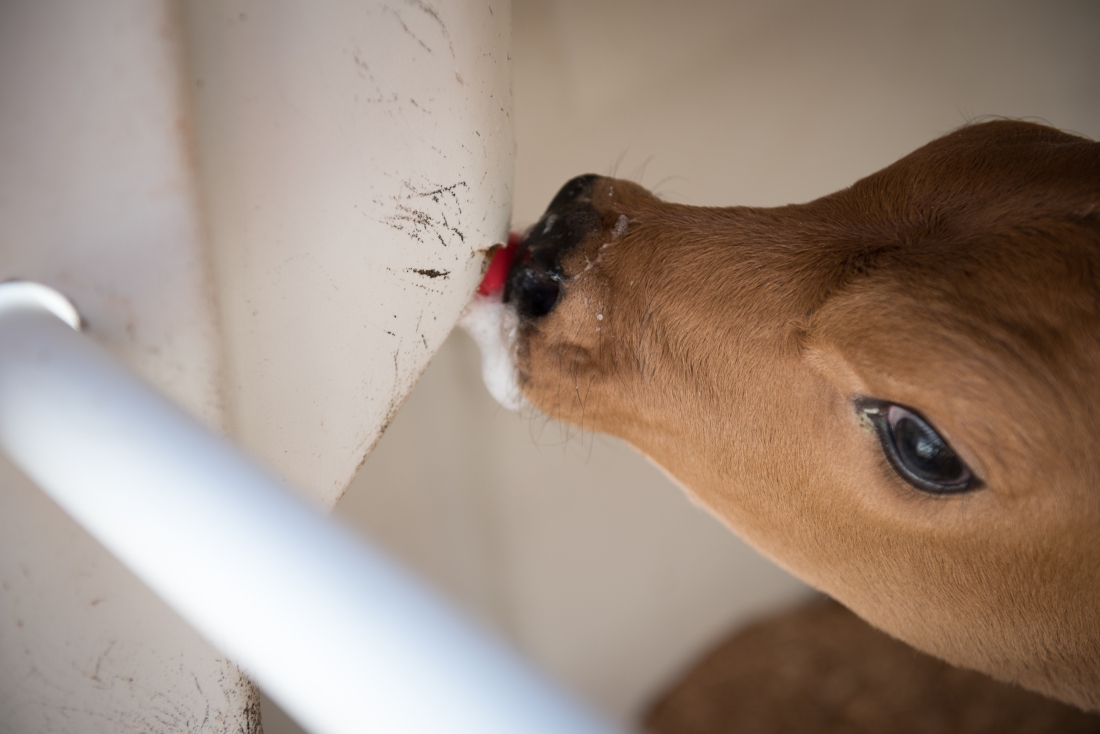 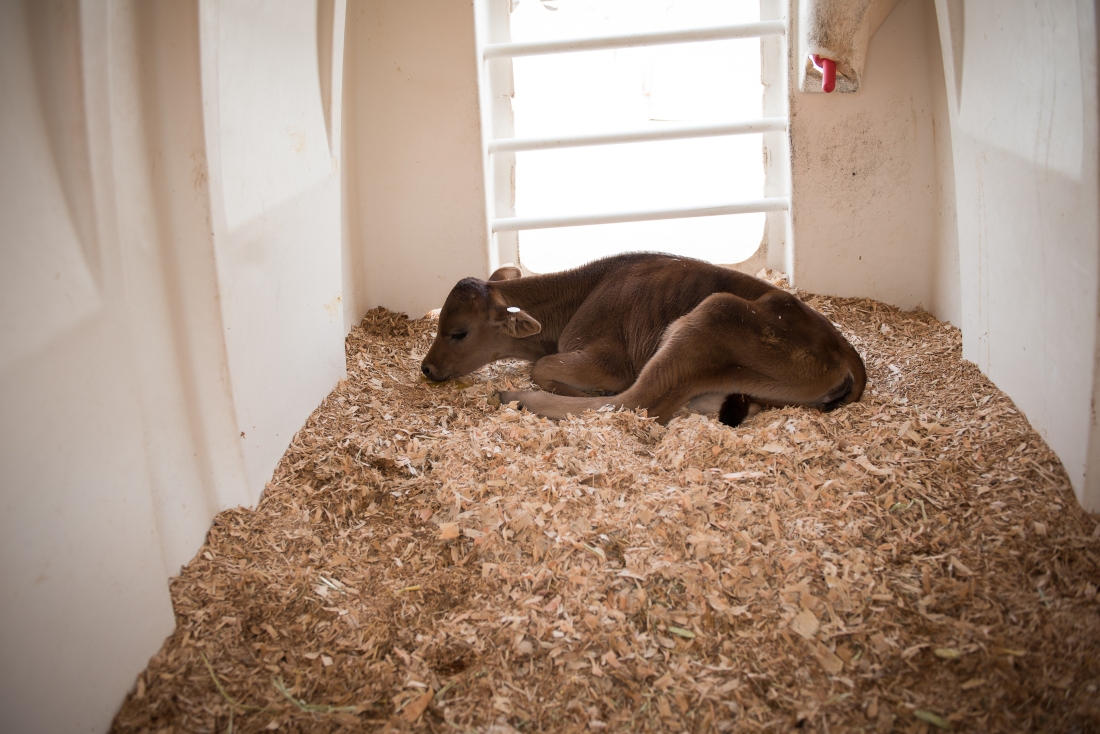 Individual housing allows diary farmers to know exactly what is going in and coming out of each calf. This helps monitor their development as well as identify illness.  The most common signs that a calf isn’t feeling well are loose manure, called “scours”, or lack of appetite. Individual housing allows farmers to know quickly and certainly which calf is scouring or not eating. The calf crew can then give that calf the extra attention and treatment that she needs.

Above is some of the calf crew who work hard to make sure the calves are well taken care of.  After a calf has spent its time in the hutch, he or she is transferred  to a transition field so they can become familiar with living in a herd.

In doing my (limited) research about calf hutches, I found that the most important thing to dairy farmers is that they raise healthy cows.   Separating dairy cows and calves reduces the risk of infection and disease. Also, a dairy cow produces more milk than a single calf can drink.  If dairy farmers were to leave the calf with the cow (thus, not milking her out), there is a good chance she would develop a mammary infection called mastitis. This infection could potentially be dangerous for both the cow and the calf that is drinking from an infected udder. If untreated, mastitis can even be fatal. Further, some cows just aren’t motherly.  Those cows might not clean off their calves, and some will actually leave the calf lay to go eat or drink or whatever else might interest them more than feeding their newborn calf. It is preferred the mother to clean off her own calf before they are separated, but not all cows will even complete that first task of motherhood. In extreme cases, a cow will even step on or charge her own calf. 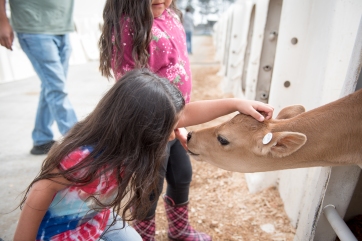 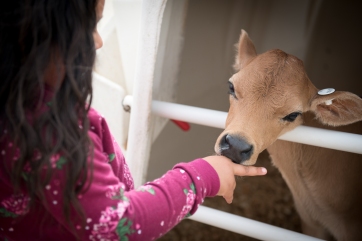 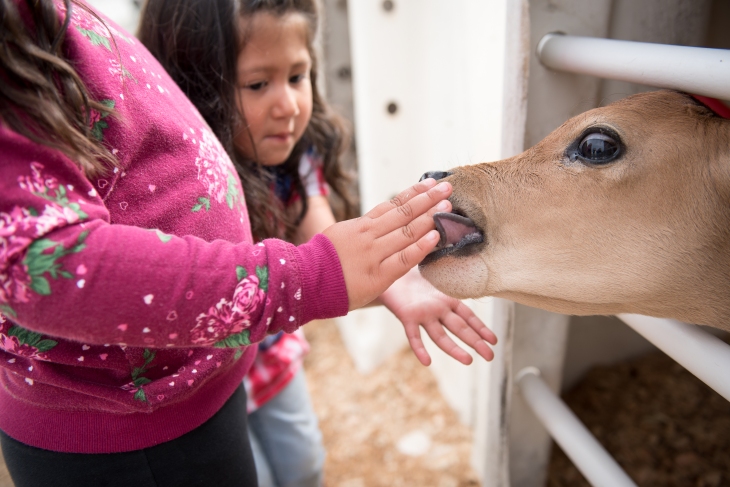 Next week we will learn about the birthing process and get more information about the calves first few hours of life.  Until then, enjoy delicious milk, cheese, yogurt, and ICE CREAM made from healthy cows.  Our community, as I have stated before, is so fortunate to have the Alexandre Family who had a vision so many years ago to properly care for and raise organic dairy cows who now produce A2/A2 milk.  See you next week!

P.S.  I heard Vanessa say that there are about eight calves born every day.  Fingers crossed we get to see a birth!

Today is the BEST day of the year!  It’s the first day of the Alexandre Family Farm Bucket Calf Project!  Today close to 140 young boys and girls descended upon the dairy, signed up for the program and then made their way to pick out the calf they can call their own for the next 8 weeks!  Now, I may be biased, because am pretty sure I don’t hide my admiration of the Alexandre Family, but watching the kids come play, meet new kids, and spend time with their families has warmed my heart.  For the next eight weeks, please join me as I document this amazing hands on learning experience the Alexandre’s provide our community.

Picking the right calf takes a lot of deep reflective thought.  Some of the kids, much to their parents’ chagrin, chose a calf at the farthest end of the rows of the calf hutches.  Did you know these animals are nicknamed bucket calves because they are fed with a bucket or a bottle with a nipple until they are weaned?  Well I googled that so it must be true.  But if you don’t believe that you should ask Stephanie or Vanessa next week (week 2) when they are going to teach you all about calf hutches.  Today a young man was trying to decide which calf he wanted to call his own and he found one he liked because the calf had the same hair he did when he woke up in the morning! 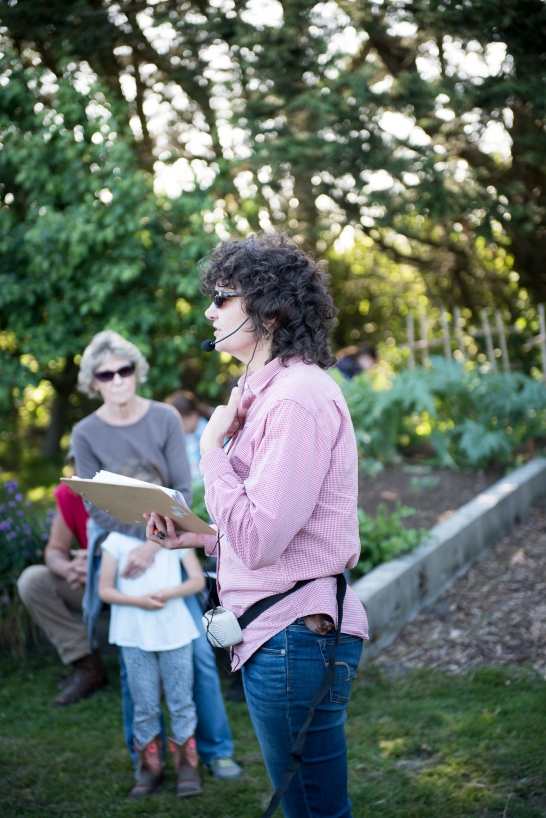 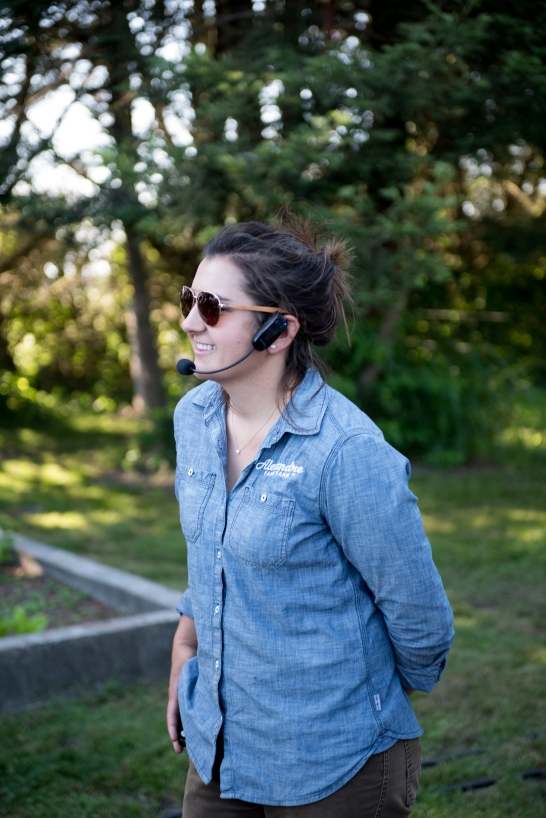 Stephanie and Vanessa take about 15 minutes to go over the IMPORTANT INFORMATION!  The first on the list is GERMS.  Stephanie explains that while her children built up an immunity to germs, not all kids have.  She emphasized the importance of washing hands after working with your calf, directing participants to the soap available in a mesh bag near the milking barn.  Then there is other information…wear proper shoes (closed toe), long pants if possible, bring gloves to avoid rope burns, a brush if you want to brush your calf and don’t forget to turn in that 4-H enrollment form!  I was amazed how intently some of the children were listening to the guidelines and followed along by reading the brochure. 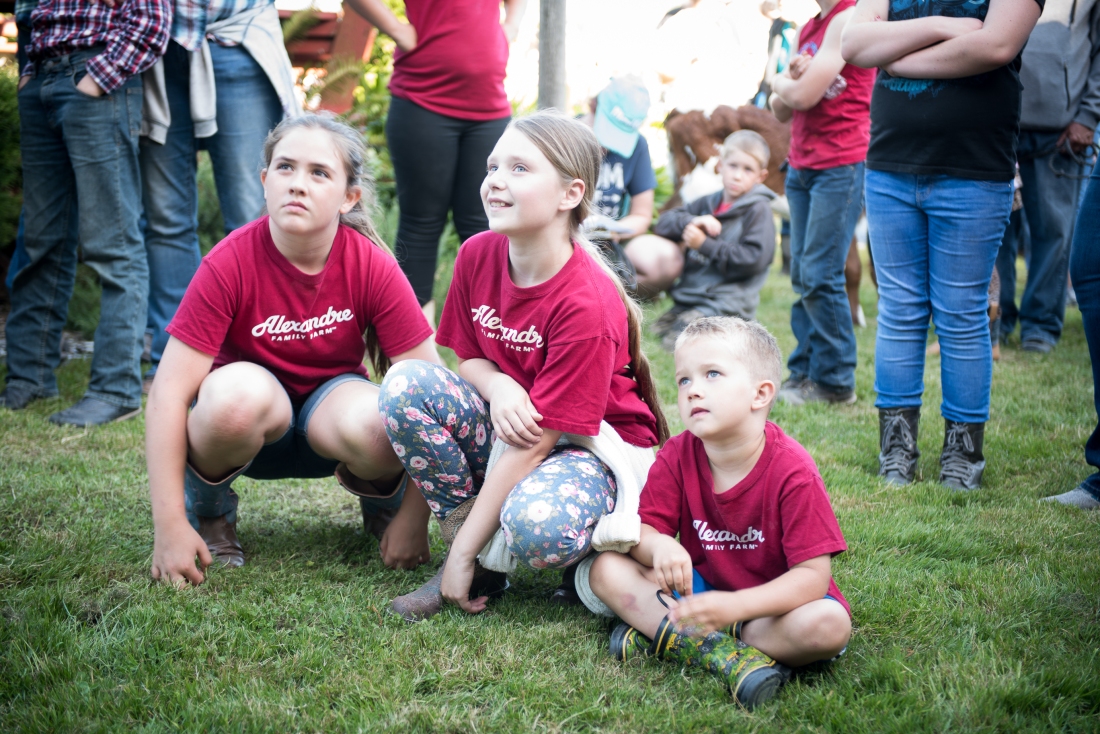 A special shout out to all of these ladies who make it all look so easy.  Joann signed all of you in with a smile on her face.  Brianna, Savanna, and Ellie brought milk over from the store, and, of course, Stephanie and Vanessa provided all the information and guidance.  The Alexandre’s open their backyard (literally, it is their backyard) to host this amazing project.  I reported this last year, but it is worthy of another mention, Stephanie began this program when her eldest son, Joseph, was young as a way to bring kids to the farm to see what it was all about.  It has blossomed into the amazing program it is today.  We are very fortunate to have this family, along with their generosity with their time and love, in our community.

I took a LOT of photos tonight as I will pretty much every Tuesday.  If you would like pictures of your children, you can go to the Alexandre Family Farm Facebook and download whichever pictures you want.  Here are more of my favorites from the day: 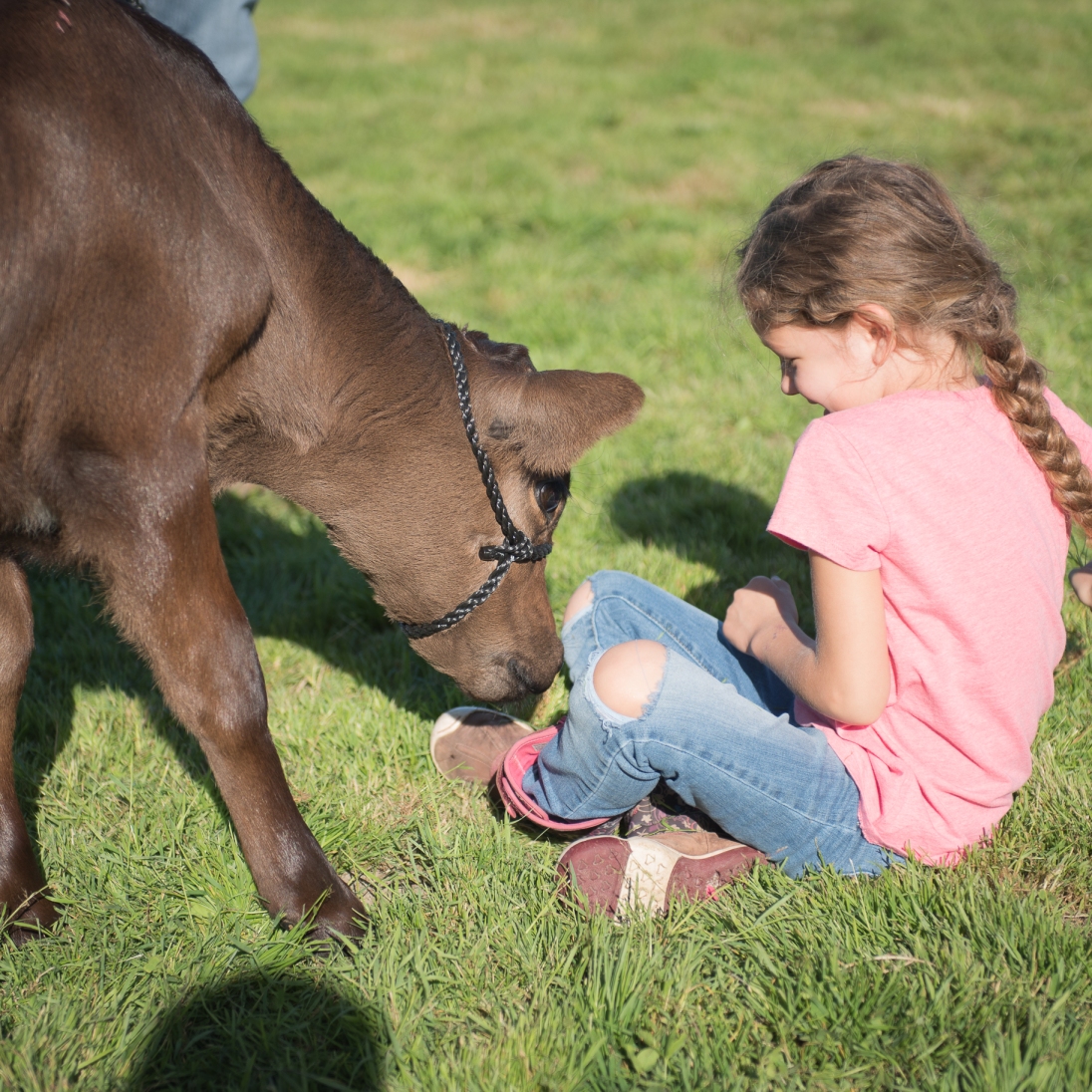 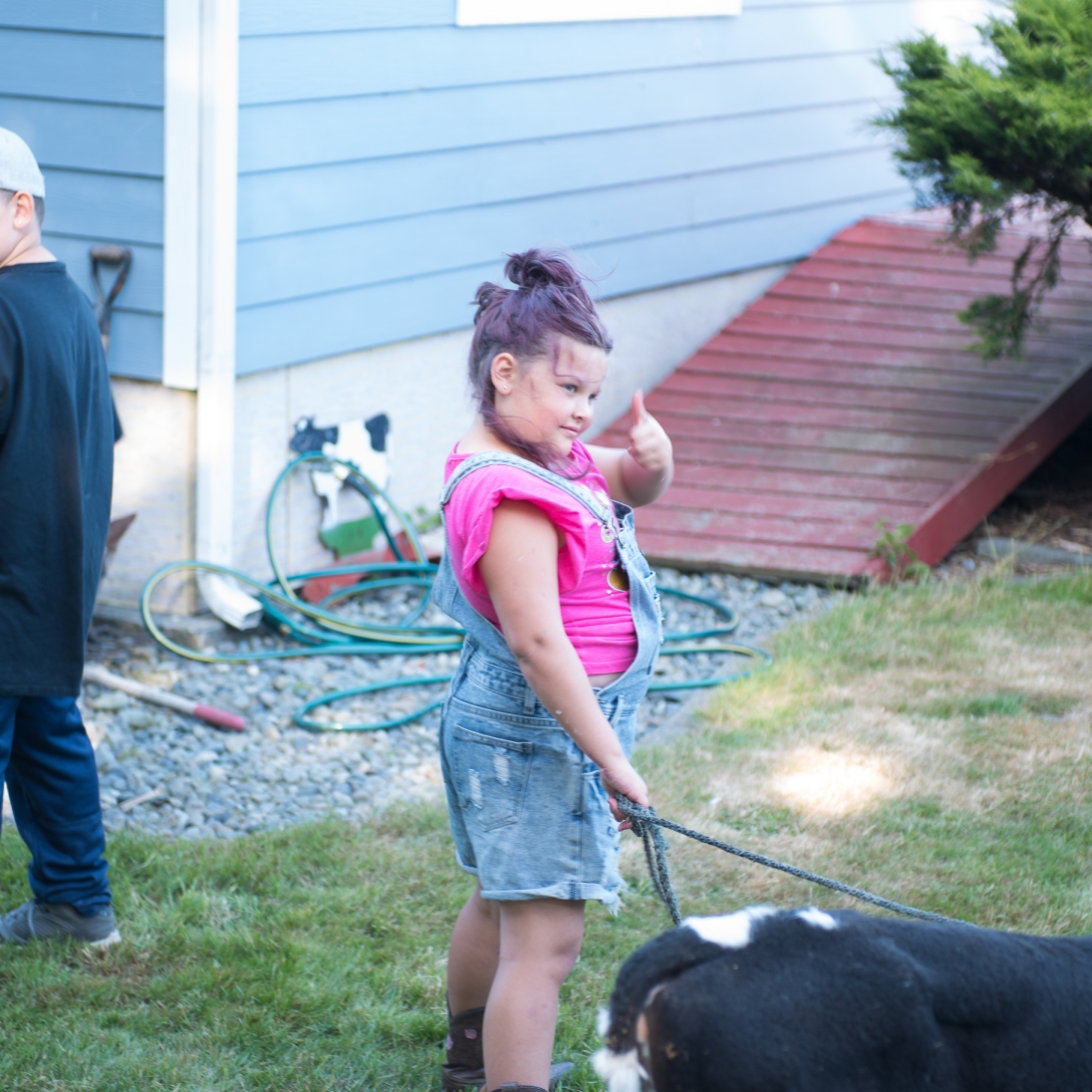 As always, please look for Alexandre A2/A2 milk in your local stores or, better yet, come out to the farm store Wednesday to Friday 2 pm to 6 pm, Saturdays 10 am to 6 pm and Sundays 12pm to 4pm.  We have eggs, organic meat and the delicious milk available for purchase!  See you amazing people next Tuesday at 5:30 pm where we are going to learn about Calf Hutches! 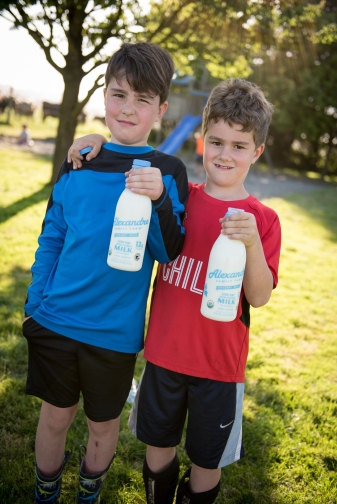 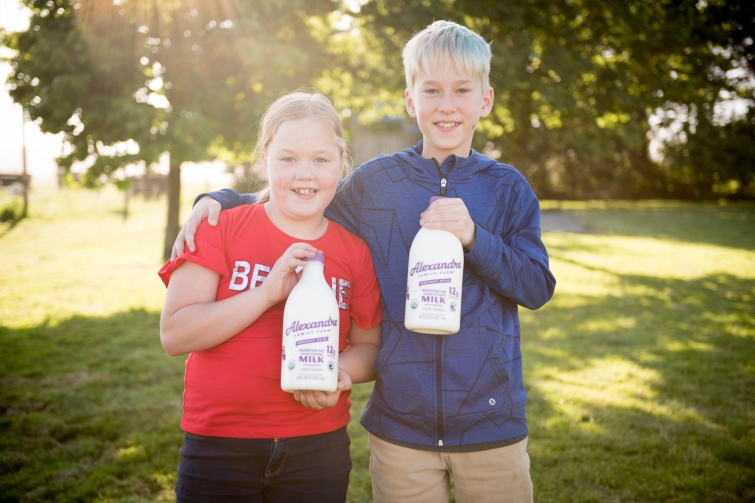